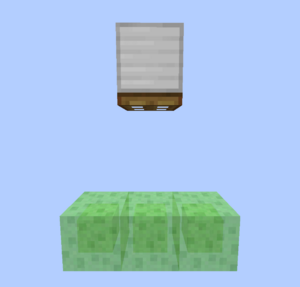 Whenever the player collides vertically with a block (floor or ceiling), the game will apply collision physics.

For almost every block, that just means setting the player's vertical speed to 0.

Note that nothing would happen if the player is somehow moving at a positive speed (and not sneaking).

When the game detects a vertical collision, it will consider the block 0.2m under the player's position to apply collision physics (even for ceiling collisions...)

Note: This glitch happens for a few ticks, but with Jump Boost it would take longer. Ceiling hover can be interrupted at any time by sneaking.

This glitch is pretty insignificant: it isn't game-breaking in any way, and requires very specific setups to be made use of.

Retrieved from "https://www.mcpk.wiki/w/index.php?title=Ceiling_Hover&oldid=834"
Cookies help us deliver our services. By using our services, you agree to our use of cookies.