Backward Momentum (abbr. bwmm) is a technique that allows the player to maximize the potential of a given momentum.

A basic strat optimization principle is to maximize the player's forward speed at the end of the provided momentum. This can be achieved by walking off the back of the momentum, followed by jumping forward.

Here is a diagram showing the essential steps involved in a backward momentum strat: 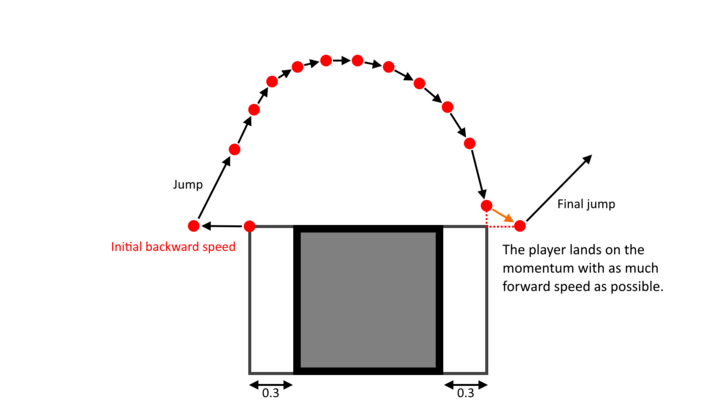 When a backward momentum strat involves turning back and forth, it is called Loop Momentum.

Here is a list of optimal backward momentum strats [TAS]:

One thing to consider is whether to "delay" the final jump or not (meaning running 1 tick off the edge, instead of jumping immediately)

Delaying a jump conserves less speed, but allows the player to jump with a small headstart.

Momentum Threshold is also something to consider when elaborating a strat: it can either be helpful or detrimental, depending on how the velocity is affected.

Backward momentum has originally been created to solve the 1bm 4.375b jump (first with 3bc momentum, then with no ceiling).

This has sparked a search for optimal 1bm strats: The most well-known 1bm strats were force momentum and c4.5 timing, but as it turns out their efficiencies really pale in comparison to bwmm strats (though they are still quite useful for most jumps, especially considering they are easier to setup and perform).

Below is a list of common bwmm strats for 1bm:

For other momentums and strats, see this compilation by Squidyerser.

Retrieved from "https://www.mcpk.wiki/w/index.php?title=Backward_Momentum&oldid=1252"
Cookies help us deliver our services. By using our services, you agree to our use of cookies.