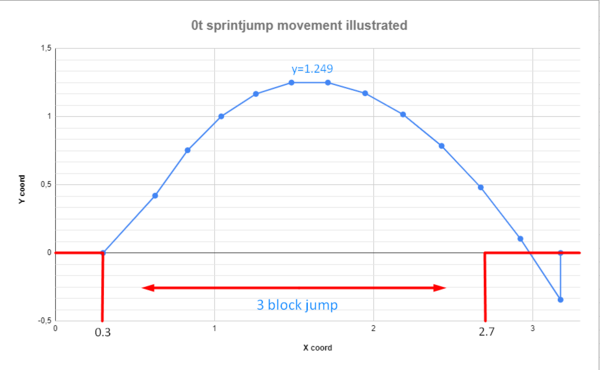 Movement formulas applied to a 3b jump.

The player's movement can be accurately calculated with sequences.

The following formulas come from analyzing the game's source code.

Note that these formulas are not exact, due to how floats are computed. When used for calculations, only the first 4-6 decimals should be considered accurate. For a completely accurate simulation, you would need to replicate the source code.

You will find further documentation pertaining to specific mechanics here:

To get the position on a given tick, you simply need to sum

The duration of a jump is the number of ticks between jumping and landing.

It also corresponds to the period of that jump's cycle when performed repeatedly.

This notion is linked to the notion of Tiers.

Horizontal Movement is a bit more complex than Vertical Movement, as it relies on many more factors: player actions, direction, and ground slipperiness.

On every tick, the game does these three steps:

We'll start by introducing Multipliers in an effort to make formulas more readable.

These simplified formulas only apply to linear movement (no change in direction).
While this condition might seem very restrictive, these formulas are very useful to analyze conventional jumps and momentum
We'll later expand on these formulas by including angles.
Definition:

In reality, angles aren't as simple as that, as there are a limited number of significant angles (see Facing and Angles).

For the purpose of simplicity, we'll ignore this fact.

Horizontal speed is set to 0 if the player hits a wall, or if the speed is considered to be negligible.

If the player hits a X-facing wall, then

is set to 0 and the player is placed against the wall.
If the player hits a Z-facing wall, then

is set to 0 and the player is placed against the wall.

, momentum is cancelled and only the acceleration is left.
If

, momentum is cancelled and only the acceleration is left.

Since arithmetico-geometric sequences have explicit formulas, we can build non-recursive formulas to calculate simple but useful results, such as the height of the player on any given tick, or the distance of a jump in terms of the initial speed and duration.

Numeric approximations are given with 6 digits of precision.

Assuming the player was airborne before jumping.

Note: These formulas are accurate for most values of

, but some negative values can wind up activating the speed threshold and reset the player's speed at some point, thus rendering these formulas inaccurate.

Assuming the player is on ground before jumping (at least 1 tick since landing).

consecutive sprintjumps on a momentum of period

If the first sprintjump is delayed, multiply