Blip is the name of a family of glitches that allow the player to land at unintended heights, which can be abused to jump higher.

It's the result of Stepping mechanics applied to falling motion.

When the player lands on ground, the game checks for wall collisions, and attempts to make the player step onto surrounding obstacles as if they were stairs: this would be done by checking whether the obstacle's height is less than 0.6m taller than ground level, but instead the game calculates the obstacle's height relative to the player's current height. Hence, the step height is artificially increased when falling.

Up until 1.14, the game would only check for obstacles above the player's feet. If no obstacles were found, the game would assume the player was already at ground level, at simply set the onGround flag as true, even if they weren't actually on ground... And indeed that's what is happening when the player is landing and encounters a wall at ground level. From there, the player can start jumping while seemingly midair, resembling a "double jump" of sorts that allows the player to jump "higher" than they're normally able to. We call this glitch the Blip-Up.

In short, to perform a Blip-Up, the player must land on a surface with a slightly elevated bump.

To actually gain height, the bump should be lower than the player's height when landing. Otherwise, it can be up to 0.6m above the player's feet, but this variant wouldn't elevate the player from the ground, instead placing them right above the obstacle as if it were a normal step.

The height gained from a blip-up depends on the player's height before landing. It could range anywhere from 0m up to a maximum of 3.92m (terminal velocity).

The longer the player falls, the more downward speed they have, so it's expected that the resulting blip-up would be higher, so long as the setup is carefully adjusted to leave as much space as possible between the player and the ground on the landing tick.

Demonstration of a blip-up used to do a quad neo

Wall Blips were discovered much later than Blip-Ups, due to the precise setup and conditions they requires.

This blip variant happen due to the same quirks of the code concerning collisions, but are trickier to understand and perform.

In short, a Wall Blip is performed by landing near the corner of an X-facing wall, with a ceiling above the inner portion.

However, that is a very simplistic description that doesn't explain how and why the glitch works.

The ceiling can be up to 0.6m above the player's head before landing, but it's easier if the ceiling is below head level. 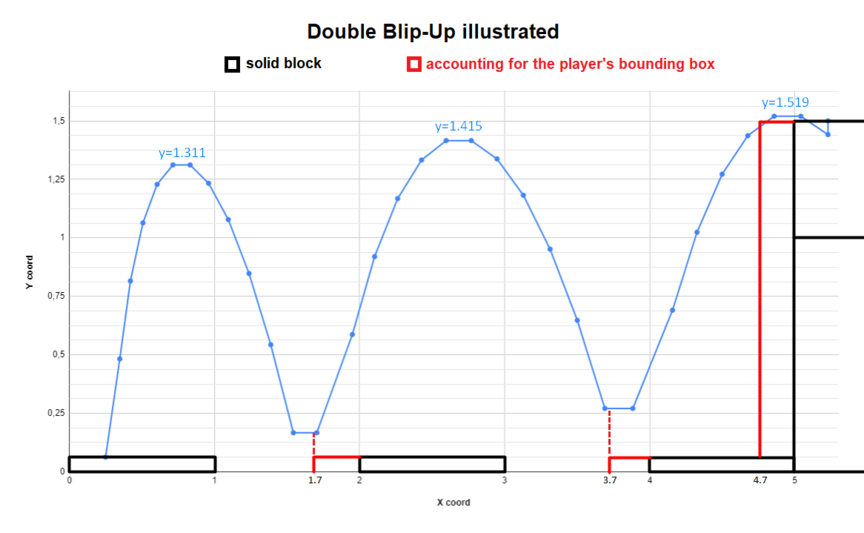 Graph illustrating a double blip-up (+1.4375b jump) with a carpet setup. Each consecutive blip adds 0.104

Blip-Ups and Wall Blips can be performed repeatedly on the same setup to gain more and more height.

This cannot be repeated forever, as the player is eventually too far above the ground, so they must fall for one extra tick and repeat the process.

Each consecutive blip-up adds an extra 0.104 height, with occasional height losses every 1-4 jumps.

You can chain 4 blip-ups on a carpet if you start from the lower part of the blip, but at the cost of some initial height (+0.353 total).

Technically, you can chain blip-ups for longer, losing some height once in a while to fall back in blipping range... until you eventually reach a height below the top surface, at which point the whole cycle restarts.

Wall Blips can be chained in the same way as Blip-ups, with the same cycle and height gains at first.

Unlike chained blip-ups, wall blips can be chained indefinitely. The resulting sequence of jump heights is pseudo-random, never reaching a maximum value.

In that sense, it's possible to create artificially difficult jumps.

Up until version 1.7.10, a bug prevented entities from walking onto a step under a ceiling.

Blips worked in before 1.8, but the Wall Blip variant was less lenient with the ceiling height (0.6m less than in 1.8)

Because you jump higher in 1.9+ (1.252 compared to 1.249), blips are slightly affected but the mechanic still behaves the same.

This version supposedly patched the blip glitch by extending the stepping region lower: the default step height is now "1 tick later" than in pre-1.14, which introduces a new glitch called Blip-Down, where the player can land below ground level under the right conditions.

To perform a blip-down, the player must land on the edge of a block, collide with a steppable wall, while moving outwards to ensure the stepping region doesn't encounter any ground.

This glitch is not as useful as the blip-up, but it allows for new and interesting jumps to be possible. It can also be chained to gain more momentum by reducing the duration of each jump, though it would require a peculiar setup.

Wall Blips have been completely patched.